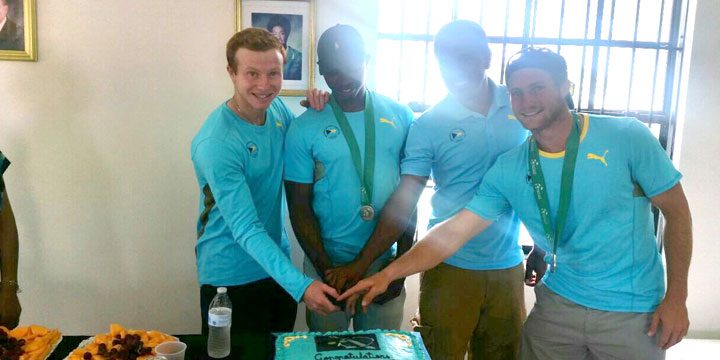 Nassau, Bahamas – The 2016 Davis Cup Zone III Co-Winners returned home yesterday to a heroes’ welcome.  The team, which includes player/ captain Marvin Rolle, Baker Newman, Spencer Newman and Kevin Major Jr. are still taking in their gargantuan win in La Paz, Bolivia. The group played their last match on Saturday where they defeated Jamaica 2-0.  This win catapulted Team Bahamas from Zone III to Zone II. In 2016 there was participation from 135 nations in the Davis Cup, making the Davis Cup the world’s largest annual international team competition in sport!

The Bahamas Lawn Tennis Association (BLTA) planned a special day which included live radio interviews, call-ins and open phone lines, newspaper interviews, television recordings and a warm congratulatory reception at the National Tennis Centre.  The team had an opportunity to relay their experiences to the general public and to share their special moments in this year’s Davis Cup Competition.  Captain Marvin Rolle who was the constant doubles player teaming up with both Baker and Spencer for the wins stated that “We had a good team this year.  We played well as a team and came out with the victory.” Kevin Major Jr. spoke about making it out of Zone III after six years “It is an accomplishment.” He was instrumental with his singles win over Trinidad and Tobago and also organized the cheering squad in Bolivia. Many warm wishes and congratulatory remarks came through the radio waves and were communicated in person.

The Team members expressed that they were honoured and privileged to represent The Bahamas in tournament play.  Spencer Newman who was also a  key team member with three singles wins stated that “When we step out onto the court they say(announcer/umpire) Spencer Newman from the Bahamas and it hits you.  They put the Bahamas on your back and when they say advantage Bahamas it’s not just you out there, you are representing the whole country. What an honour!”

From an executive perspective, President Elwood Donaldson talked about how tremendous this win was.  “The Davis Cup Team has made us proud.  This is our first step as we move on to Zone II.” As we continue to bask in this splendid victory we are excited about the future and in the words of Baker Newman who went undefeated in singles Davis Cup play in his first showing, “There is more to come in the future.”