3 matches won today in U16 Junior Tennis championships for Bahamians

You are here:
Junior TennisNational Teams 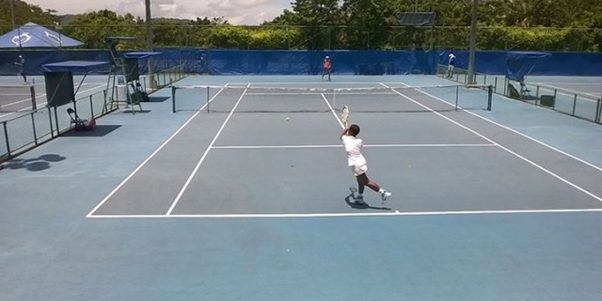 Today in matchplay Kofi Bowe from Freeport, Bahamas represented well as he won his consolation match today against Ruben Pinchas from Jamaica 6-4, 6-1.  Kofi who is only 12 years old is debuting on the under 16 Boys International Competition.  Kofi was also instrumental when teaming up with Donte Armbrister to get a doubles win over El Salvador 7-5, 6-3.  Donte Armbrister played in a highly anticipated main draw quarterfinals match against Patrick Sydow.  Donte put up a good effort and represented well but lost in two sets 2-6,2-6.

On the girl’s side, Afrika Smith played well and came up with a great win in her consolation match today against Curacao Zima Osario Gomez 7-5,6-2.  Sydney Clarke (who played well and lost in her quarterfinals match yesterday) unfortunately had to retire in matchplay against Dominican’s Laura Quezada today.    Donte Armbrister, Sydney Clarke, Afrika Smith and Kofi Bowe have definitely done the Bahamas proud as we had three main draw appearances and two quarterfinals placement.  The talent of these young tennis players is very great and can only continue to grow.  We know that as some of these players move onto International Tennis Federation (ITF)  Tournaments the experience and matchplay gained in El Salvador will aid them in their tennis quest.

Kofi Bowe remains in El Salvador for the upcoming Under 14 Junior Tennis Championships.  Kofi will be joined by Anthony Burrows Jr, Ryan Fox, Emma Weech and Donesha Gibson.  We are excited about this team who we expect to advance well in the tournament.   As matchplay begins we will update you on the progress of  Kofi, Anthony, Ryan, Emma and Donesha.

Ceron Rolle who captained the U16 Team with much success will also captain the U14 Team.

The JITIC competition has the top juniors in the Caribbean and Latin America competing for the title of the ‘best of the best’ in Junior Tennis in the region.

The BLTA Fields Two U14 Tennis Teams for World Juniors in El Salvador
May 22, 2022