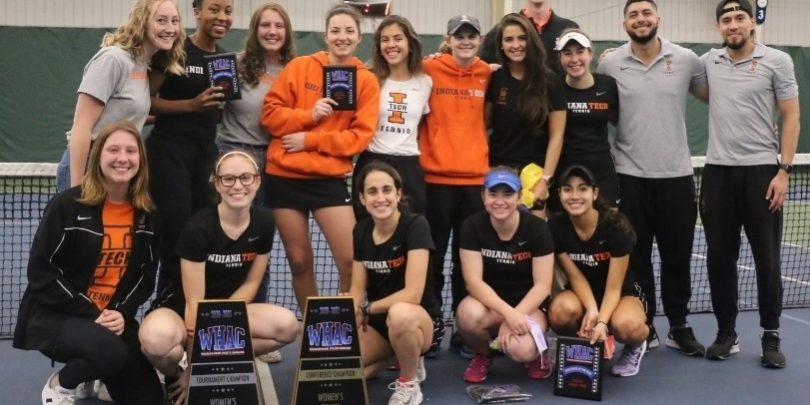 Abigail was instrumental in the win. She teamed up with Ana Gomez in the #3 doubles position to claim the advantage for the Warriors with a 6-4 win. With this win, The Warriors have made even more history by booking a ticket to the National Association of Intercollegiate Athletics (NAIA) Nationals! The Nationals take place May 18th-22nd in Mobile, Alabama for the first time in program history.

Lauryn Daxon and Missouri Vikings in the Heart Conference Semifinals

Lauryn Daxon and the Vikings had a good season ending in the semifinals. Despite sustaining an injury during the season Lauryn who is now a senior was able to come back to compete for her team.  In the quarterfinals, the team won over John Brown 4-1 with Lauryn at doubles.  In the semifinals, the Vikings were not able to advance further but ended the season against Baker in the Heart/ American Midwest Conference Postseason Tournament.

The BLTA congratulates Lauryn on a successful tennis college career and in achieving good results with her team in her senior year.

Sierra Donaldson and Lee Flames made it to the Quarterfinals of the Gulf State Conference Championships. Despite the team not advancing to the semifinals their hard work throughout the season has not gone unnoticed. Sierra was instrumental in receiving an Athlete of the Week award during the tennis season.

The Bahamas Lawn Tennis Association congratulates Sierra and Lee Flames on their championship run. This year was indeed successful and we wish the team the very best in the future.

Sydney Clarke and the Blazers advanced to the C-USA Quarters and faced the #1 seed Dominion. The team which started the season on a rough patch was able to turn it
around with the assistance of Sydney Clarke, the Ministry of Youth, Sports and Culture’s  Athlete of the Year for 2021. Sydney had an eventful freshman college season and a  bright tennis college career is ahead of her.

The BLTA congratulates Sydney and the Blazers on a fruitful college season and the run to the quarters.

All eyes are now on Abigail Simms and the Tech Warriors who are set to compete in May for the NAIA Championships. We wish them the very best as they seek to continue to make tennis history.