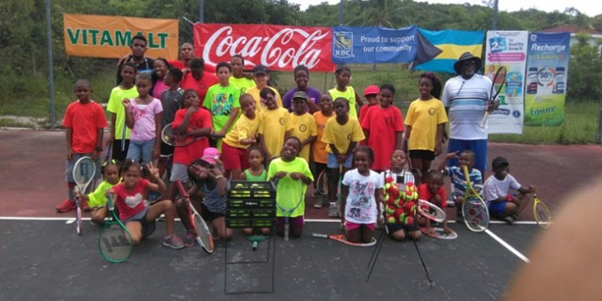 There was a great showing once again the 17th annual Artie Johnson All Eleuthera Youth Tennis Camp held in Eleuthera, Bahamas.   The camp was dubbed a great success by the Tennis Organizer Mr. Artie Johnson.   There was an average of 45 kids at the camp on a daily basis.  The theme of the camp this year was  ” TENNIS FOR  HUNGER” where the children assisted by the organizers was able to gather non- perishable foods and to deliver the food packages to the elderly in Palmetto Point, Governor’s Harbour and James’s Cistern in Eleuthera.

The organizers also went to Harbour Island for a week of camp and over 60 kids were in attendance along with Coach Dwight Stewart. There were many local leading citizens who imparted knowledge to the kids each day including Rev Godfrey Bethel and Ms Bethel, Pastor Clarence Thompson, Ms Kathy Coleman, Mr Darrold Smith, Ms Agaither Bethel, and Rev Kevin Pinder.  One of the speakers challenged one of the junior players to a set and we will just say he was “LOVED”.

Camp Organizer Mr. Artie Johnson said he saw lots of great potential among the kids this year. He extended thanks to the many sponsors of this year’s tennis camp and volunteers Alva Nixon, Parry Culmer, Shamar Culmer, Sharon Culmer, and Cortez Cooper.