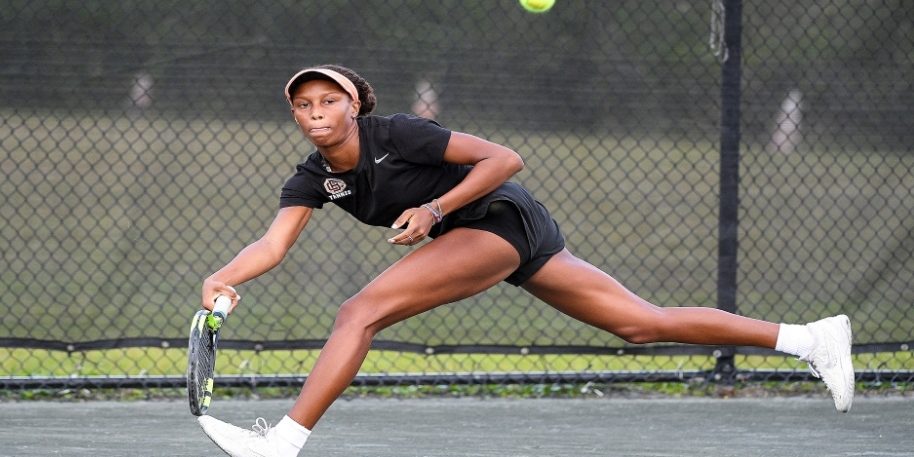 Sierra Donaldson and the Lee University Flames heated up the courts with their win over McCrae College Bobcats. Coming off a win over Carson-Newman last Saturday in its spring opener the Flames won today over the Bobcats 7-0. Sierra Donaldson playing in the position of #4 Flight Singles won over Mei Hiramatsu 6-2, 6-2. In #3 Flight doubles Sierra gave The Flames another win in their column, teaming up with Lauren Trammell to defeat Jaden Acklin and Emily Harrison of the Bobcats.

The Flames, who are coming off a good season in 2019 with a 16-6 record starts the season 2-0. They will face Christian Brothers University on Feb 16 and another win would improve their record to 3-0.

Abigail Simms playing for the Indiana Tech women’s tennis team had a very competitive 3-setter in the Tech’s season opener. Abigail who plays in the #1 position for her team lost the first set and fought back to win the second set but lost the third set, 1-6, 6-4, 5-7.

Abigail would win her doubles match with teammate Carolina Fabbri (7-6). Indiana Tech, however, would fall to Tiffin University 2-5. Tech Warriors return to action on February 15 as they take on No. 21-ranked Cumberland University.

Iesha Shepherd and the Jackson State University Tigers went into this weekend’s match 3 all for the season. The Tigers faced Louisiana Tech and would lose to the Techs. Iesha teamed up with Nina Zhang in #2 doubles losing 2-6 to Ana Jover and Claudia Oravcova. Iesha
also played in #6 Singles but left her match unfinished (4-6, 3-4) as the Techs had already secured a 4-0 win.  Iesha and the JSU Tigers will play again on February 12 versus Mississippi College.

Afrika Smith and the Bethune Cookman Wildcats faced Troy University at home. Afrika who is leading her team is playing #1 singles. Afrika and the Wildcats came up short to Troy’s Matea Mihaljevic 1-6, 2-6. Teaming up with Diarra Thomas they lost to Khokhlova and Khrustaleva, 1-6. The Wildcats hope to bounce back February 12 against Keiser University.

The Bahamas Lawn Tennis Association extends well wishes to the tennis collegiate Afrika, Iesha, Sierra and Abigail as they represent their respective college. Congratulations also to Sierra and the Flames on their win this weekend. Joshua Turnquest, Lauryn Daxon and Hannah-Joy Simms will soon see action in their season openers.

We look forward to some strong performances.