You are here:
Junior TournamentsNational Teams 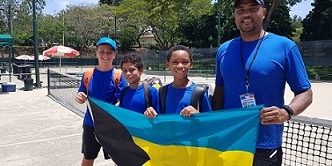 Representing Team Bahamas, Freeport native Jerald Carroll played against Puerto Rico’s #2 Ian Arenas in the U12 ITF/Cotecc Team
Competition in the Dominican Republic. Jerald debuted in his first international tournament but did not display any nerves. He played well and won his match 6-3, 6-3. Coach Jared Turnquest said Jerald “Played big and confident”.

Jackson Mactaggart would be up next playing the #1 Lester Marin from Puerto Rico. Coach Jared Turnquest said Jackson “found his focus” in the second set as he came from 2-5 to make it 4-5 with some chances to even up the score. Jackson also played well but lost 2-6, 4-6.

With the score tied 1 all, it would fall on the doubles for the deciding match. Khai Rhees would team up with Jackson Mactaggart. The duo would fight but lost 2-6, 2-6.

The Boys Team will continue on in round-robin play for the opportunity to advance to the main draw. Our U12 Girls BreAnn Ferguson, Saphirre Ferguson and Jalisa Clarke will see action today. The Team was in practice yesterday with Coach Marion Bain.

The Bahamas Lawn Tennis Association wishes both teams success as the tournament progresses.