Bahamas at 12U ITF/GSDF Caribbean Tennis Team Championships in Curacao 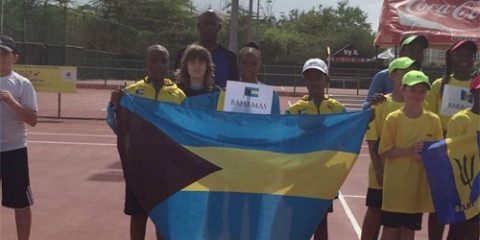 The Bahamas has a tennis team participating in the 12U ITF/GSDF Caribbean Team Championships in Curacao.    The team consists of the Boys: Michael Major Jr. and Anthony Burrows Jr and on the Girls’ side, Genesis Missick of Freeport, Grand Bahama and Kaylee Kanuka.  Our team captain is Coach Ricardo Demeritte. The competition’s format is round-robin play in the qualifying round with both a singles and doubles match every day.  The top three (3) nations in this tournament will advance to the Master’s Event in Mexico in November.

This 12U Team Championships began in 2013.  In this year of introduction, both our Boys’ and Girls’ Teams won the gold!  So far in tournament play, the Boys Team of Anthony and Michael have advanced to the main draw with a win over Guyana 3-0.  Burrows and Major both won their individual matches against Guyana and teamed up to win the doubles.  Despite a loss to Aruba and Surinam the Bahamas who is seeded 3rd in the draws will move on in the tournament.

The girls got off to a tough start with losses to the US Virgin Island and Trinidad & Tobago.  Both Kaylee and Genesis who are representing the country for the first time on the international stage are performing well and will also continue on in match play during the week.

The Bahamas Lawn and Tennis Association wishes this young team of Genesis, Kaylee, Michael and Anthony all the best as they continue on in tournament play.  They all have great potential.