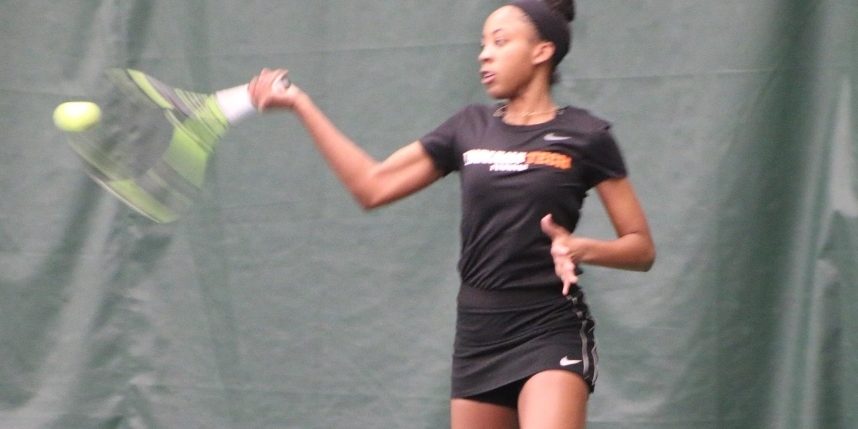 Abigail Simms and the Indiana Tech women tennis team remain undefeated in the Wolverine Hosier Athletic Conference. Simms won in doubles following a tough singles lost 6-7, 4-6 against Gomez from Aquinas. In doubles, she teamed up with Isidora Hrnjak winning a tiebreaking battle 10-5. This duo was featured in the Oracle ITA Women’s NAIA Rankings both nationally and regionally. Abigail Simms and Isidora earned 21st ranking in the nation for doubles where the pair has gone 6-1 this season at the number one position for the Warriors. They will play again Tuesday, March 23rd when they face Spring Arbor in Fort Wayne.

Sierra Donaldson posted 2 wins to help Lee University women’s tennis team with a 7-0 shutout over Shorter University on Friday afternoon at the DeVos Tennis Center. In singles, Sierra Donaldson blanked Owen 6-0 and 6-0! In doubles, Sierra teamed up with Sickinger in a 6-2 win over Novis and Mulkey at the third position. The Lady Flames is in action today against West Alabama.

University of Alamaba Birmingham(UAB) 6 match winning streak came to an end on Friday afternoon after dropping a 4-2 decision to Southern Mississippi. Sydney played well as #4 Singles but lost in singles 4-6, 6-7 against Yazgan. She would team up with Heckling with a 3-6 finish in her doubles match. However, on Saturday March 20th Sydney helped the
Blazers to put a win in their column over LA Tech. Sydney won over Romero 7-6, 6-3 in singles. The Blazers improve their record to 9-6. Their next match is against Western Kentucky University on March 27th.

With a 6-2 record for the season, Lauryn Daxon’s  Missouri Vikings team won their last two matchups against John Brown and Evangel University. The Nationally-ranked Missouri Valley College won matches (5-2) against both Evangel and John Brown. The Vikings are ranked #24 nationally and are on a 4 game winning streak. They will face Grand View University on March 26th.

Iesha Shepherd and the Jackson State Lady Tigers prevailed 4-3 over Jackson State on Thursday.  On Saturday the tennis team earned its fourth sweep on the season, defeating Alabama A&M by a final score of 4-0. The Lady Tigers improved to 7-3 overall, 5-1 in their conference.

Hannah-Joy Simms and Brescia Bearcats travelled for a non-conference matchup with the Tigers of Campbellsville University on Wednesday morning where they lost. Even though the Bearcats lost to Asbury College also earlier in the week Hannah Joy Simms posted the only win for the team 7-5,6-2, playing as the #1 singles.

The Bahamas Lawn Tennis Association congratulates all the collegiate tennis players for their great performances over the past weeks. Congratulations are also extended to Abigail Simms who previously obtained singles ranking and now has achieved doubles ranking on the college circuit. Continue to shine ladies!