You are here:
International Tennis Club 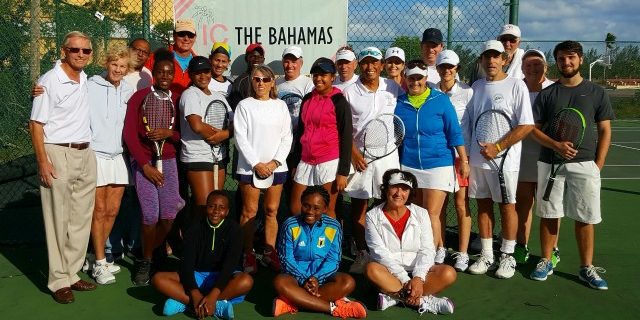 Nassau, Bahamas – Starting 9.30am at The National Tennis Centre Monday, 9 January teams from USA, Canada, Barbados, an “International” team from several IC countries and The Bahamas will be competing for The Deltec Trophy.

This event based on age groups in senior tennis categories involves players of a high international standard.  The Bahamas who were runners up to the USA last time has a strong team with former Davis Cup Captain & player John Antonas and former Fed Cup Captain & player Kim O’Kelley on its side – both are past National Champions.

Another Bahamas Davis Cup player and former National Champion, Leo Rolle, is guesting with The Barbados team.  There are five matches each day comprising men’s doubles, ladies’ doubles and mixed doubles with all teams playing each other over five days of tennis.

Strong competition is again expected from The USA who are seeded along with The Bahamas. This means they will not meet until the last day on Friday, 13 January.

The opening day’s matches see USA v Canada and Barbados v The International team.  On Tuesday, The Bahamas starts its quest for The Deltec Trophy against Barbados.  Full schedule and details of teams and events are on the Bahamas IC website – go to www.ictennis.net then click on Bahamas logo and keep clicking. Matches are anticipated to be all morning from 9.30am each day.

As a warmup and a good experience for top Bahamas juniors some of the IC Senior players are going to the National Tennis Centre at 2pm Sunday, 7 January to play matches together.  The Ministry of Tourism is putting on a welcome for this event there that afternoon from around 3pm.

There are 40 IC Clubs around the world made up of players of high standard who have generally “carried their rackets overseas”, won National Titles or contributed strongly to the development of tennis.  The IC motto is “Hands across the net, friendship across the ocean”.

As well as arranging inter country IC matches and events, the IC also sponsors a worldwide International Country team event for juniors on every continent one year with the worldwide finals the next year. The last two Worldwide Finals have been at Wimbledon and Monte Carlo.  The IC also has a philanthropic arm that raises funds and in conjunction with IC Clubs runs tennis projects in poor and underdeveloped areas of the world.

Kit Spencer, President of IC Bahamas and a main IC Council member, said at the start of this event that they were looking forward to welcoming tennis friends from other countries to this fourth bi-annual event. He anticipates “strong tennis competition played in a good IC sportsmanship tradition along with an enjoyable social week in Bahamian winter sunshine.”  He thanked Deltec for continuing the previous sponsorship of The SG Private Banking Trophy following their recent acquisition of its Bahamas business.  Kit Spencer also noted that it was very fitting that this event is being held at The National Tennis Centre this time. It is where the stadium court is named after Clarence Dauphinot, the founder of Deltec as both his family and Deltec were a significant force in helping create this facility when he was BLTA President.

Top 16s in North America Compete at IC Rod Laver Junior Challenge this Past Weekend at the NTC
June 23, 2020