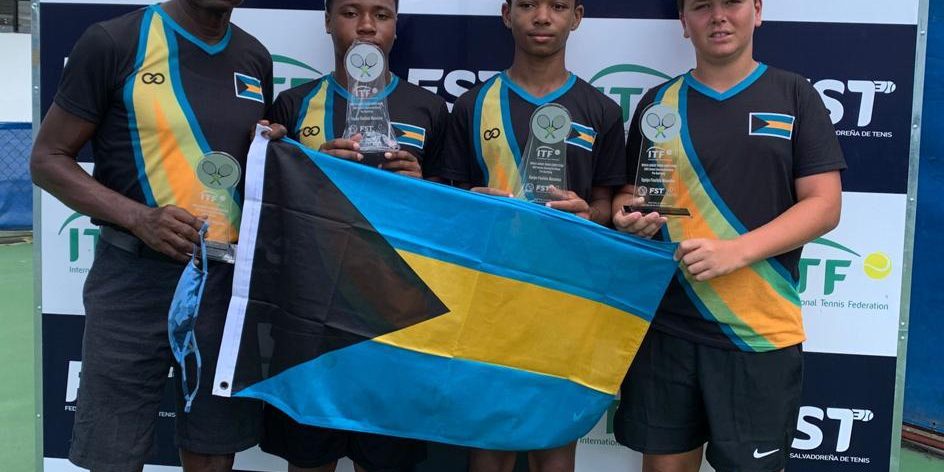 The Bahamas Boys Team of Jackson Mactaggart, William McCartney, Jerald Carroll and  Coach Bradley Bain played hard against Guatemala. Despite their efforts, they lost in the finals 1-2. On the road to the finals, The Bahamas won their pool and played exceptionally in the playoffs. In the finals, William McCartney gave a good effort but lost 6-7, 1-6, Jackson Mactaggart played hard but lost in a three-setter 7-6, 1-6, 2-6. The doubles pairing of Jackson Mactaggart and Jerald Carroll was victorious 6-4, 6-3. The most recent successful run by a Bahamas team at WJT was experienced in 2016 with the team of Jacobi Bain, Denali Nottage, Kofi Bowe and Coach Artie Johnson who also advanced to the finals.  This year we witnessed another splendid performance. Guatemala will move on to the qualifying rounds in Mexico.

The Bahamas Lawn Tennis Association (BLTA) congratulates Jackson, William, Jerald and Coach Bain on an awesome run to the finals of the World Junior Tennis (WJT) and the second-place finish in the pre-qualifier World Juniors Tennis. The team had some great statistics; they went into the finals undefeated, McCartney was undefeated in singles prior to the finals and the team went undefeated in doubles for the entire tournament!

Team Bahamas girls placed 2nd out of 13 nations. On the last day of competition for the Girl’s Team, the Bahamas faced Honduras. Sarai Clarke in the #2 position played hard but lost  5-7, 0-6. BreAnn Ferguson playing in #1 spot played strong but lost 2-6, 6-7. Sarai would team up with BreAnn and the duo played hard but lost 5-7, 2-6. The team ends play at #6 out of 9 countries. Congratulations are extended to the team of Breann Ferguson, Sarai Clarke and Rachel Thompson and Coach Paula Whitfield.  The Bahamas was the only Caribbean country to make it to the Girl’s Playoffs. We applaud your efforts.

The beautiful team uniforms were designed by Jamila Thompson and the uniforms were donated by tennis enthusiasts from Freeport, thank you. The BLTA thanks the team members for their splendid participation in the 2022 World Junior Tennis Competition in El Salvador. We are also appreciative of coaches Bain and Whitfield. The Bahamas was well represented at this regional event and we are proud of our teams.